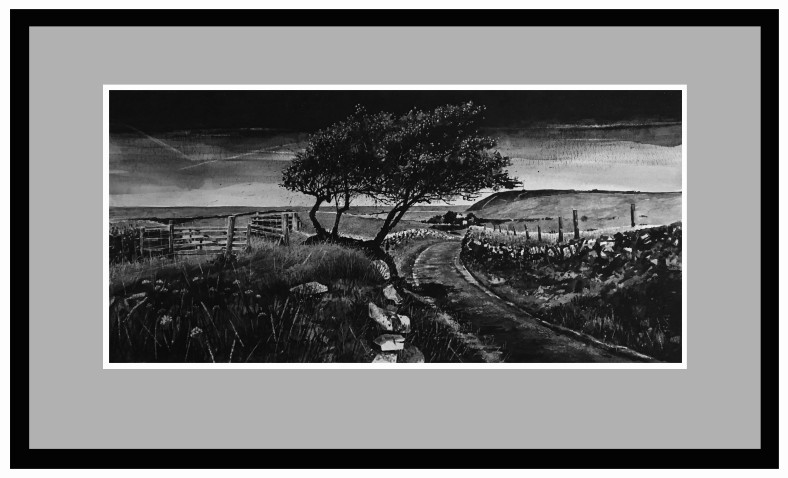 Back to using my Bideford Black pigment on Bockingford paper 700 x 340mm.  This time is a picture inspired from a circular walk from Watersmeet to the Blue Ball Inn at the top of Countisbury Hill.  Then onto Lynmouth and back up to where we started our walk.
The Blue Ball Inn was so called because in the late 18th century it was used as a coaching stop.  A blue ball used to be raised on a pole to notify the coachmen that someone was in need of passage.  It has a history of haunting and highwaymen!

A mysterious place is The High Moor.  These images have been photoshopped after a visit to the Chapman Longstone above Challacombe Exmoor, Somerset.
The Chapman Longstone is the tallest prehistoric standing stone on Exmoor. The landscape around the Longstone contains extensive archaeological remains dating from the Neolithic (5000 years ago) until recent times. Aside from the Longstone, the Chapman Barrows, a linear barrow cemetery, demonstrates the significance this landscape had for Exmoor’s Bronze Age people. A group of standing stones known as the quincunx, due to its arrangement of five stones, is also found within this area. Nearby a long enclosure, possibly dating to the Neolithic period, suggests the importance of this area even before the first Bronze Age barrow builders. Occupation of a farmstead at Radworthy, on the Challacombe side of the Chapman Barrows may have begun before the Norman Conquest and continued into the post-medieval period.
Paracombe Village Longstone Landscape website. 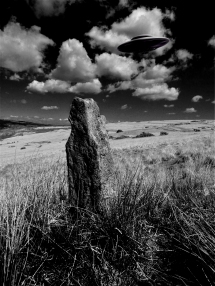 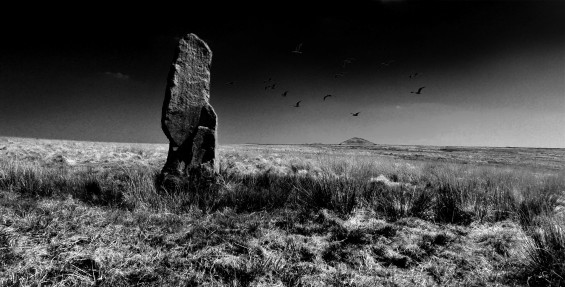 On the left the famous West Anstey Longstone and right the Chapman Longstone with the Longstone Barrow on the horizon.  This longstone or menhir marks the source of the River Bray. 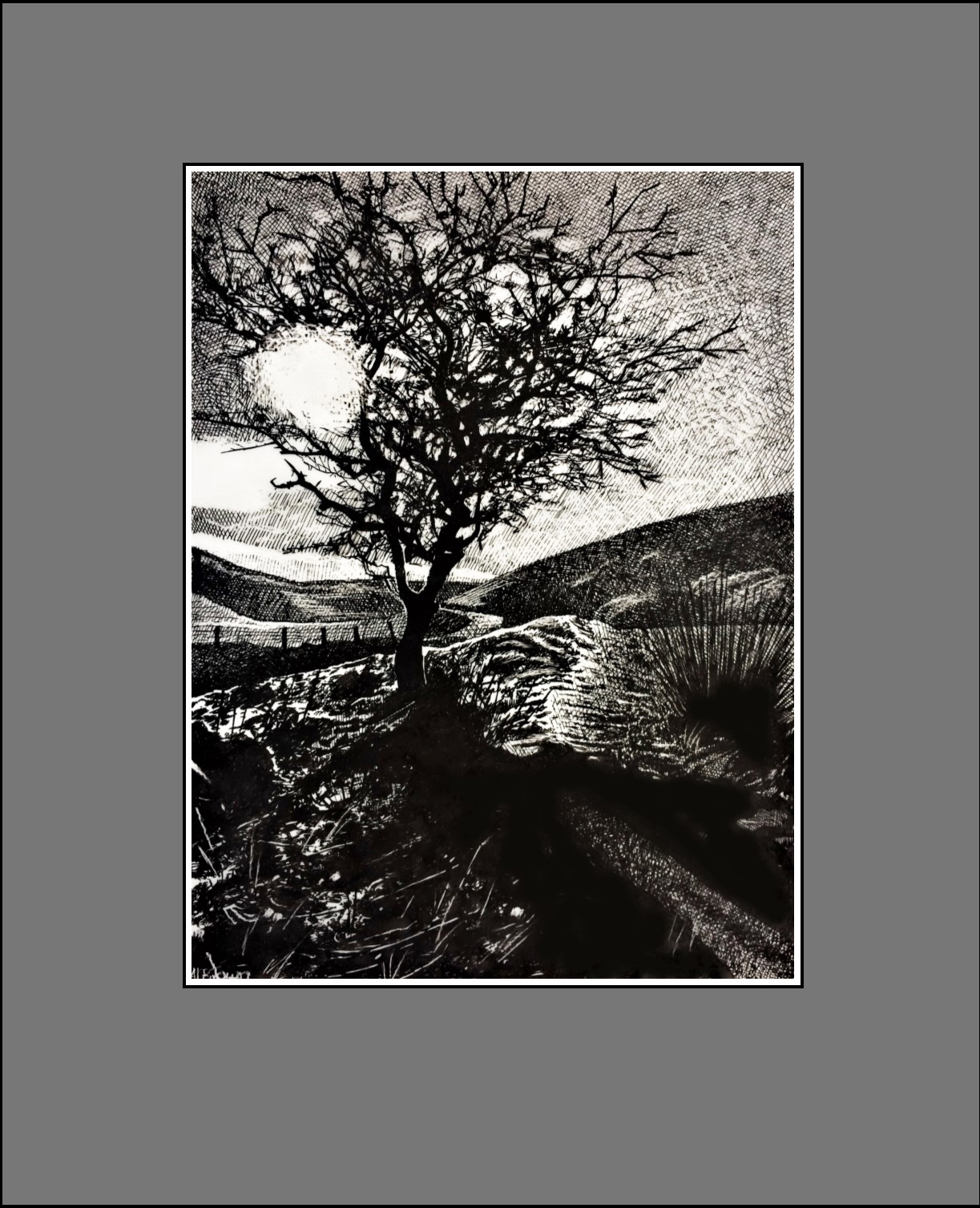 After a walk on Exmoor and an iPhone shot this is the result.   A pen & ink sketch of a scene along the walk.  I loved the stark brightness of the Autumn sun and decided to draw what I saw.  The highlights along the path really stand out this time of year.  This will be printed as a limited edition as seen below.  A few adjustments have been made and the sun’s shine has been made more circular.  Al 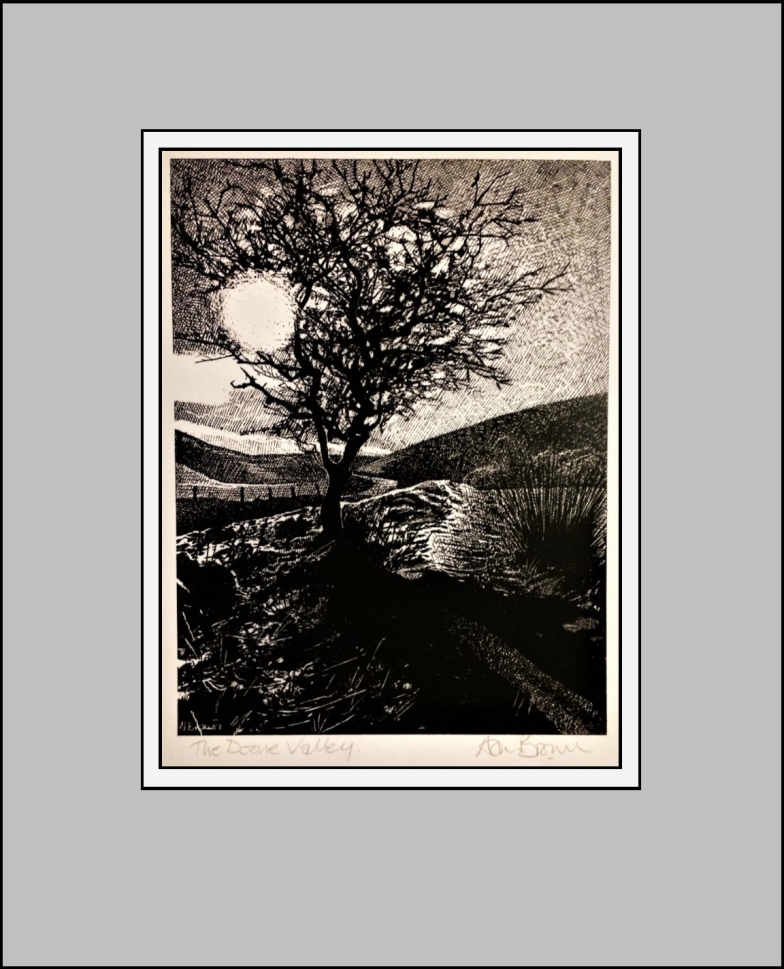 Walking around Winsford you come to this line of trees on the downward stretch of the moor.  I liked the how the sunlit fields behind the tree caught the eye.  This is a mixed media painting 510mm x 300mm.  As usual the titanium white becomes prominent in a photograph but not on the original work.  Al

Another mixed media painting from a wonderful part of Somerset This part of Exmoor is just coming down hill into Winsford.  Image size 510mm x 310mm.  Pencil, pastel and acrylic on handmade paper.  For once this is a painting that I actually like.  I know this makes no sense but usually I look at the final thing and there’s always something that could’ve done better or simpler.  Sadly the subtle blues in the tree’s canopy and ground details become lost in a photograph but at least I feel that I’m heading in the right direction with my work.  Al

A picture painted from a walk made earlier this year.  Bye Hill on Exmoor in Somerset, England.  300mm x 300mm mixed media on paper.  A wonderful walk and the pub in the village called The Royal Oak is fantastic.  Al

PS Please check out my other site, Why Not Walk for an article about a circular walk around Winsford and the Exmoor National Park.  Photos and walking guide!